David Barnes was born in Princess Anne County, Virginia, on September 29, 1843, the second of seven children born to John Barnes and Catherine Bonney.

On March 1, 1862, when David was nineteen years old, he enlisted for the duration of the Civil War in Company G of the 16th Virginia Infantry at Tanners Creek Crossroads in what was then Norfolk County. Tanners Creek was the original name of the Lafayette River. Company G, also known as the Atlantic Guard, was a local company from Princess Anne County commanded by Capt. William E. Williams and Capt. John T. Woodhouse, later promoted to Major.

David’s muster rolls show that he was present for duty with the 16th Virginia for almost the entire war, except on two occasions. The first was on July 1, 1862, when he was wounded at Malvern Hill and sent to hospital in Richmond. The second was on February 23, 1863, when he was admitted to General Hospital No. 9 in Richmond.

The 16th Virginia was involved in almost every engagement of the Army of Northern Virginia beginning with the Seven Days in 1862 and ending with the Petersburg siege in 1864–65 and the retreat to Appomattox in April 1865. David was probably with the 16th for 2nd Bull Run, Antietam, and Fredericksburg in 1862; Chancellorsville and Gettysburg in 1863; and the Wilderness, Spotsylvania, Cold Harbor, and Petersburg in 1864.

In the summer of 1864, the Army of Northern Virginia lay entrenched around Petersburg, holding Grant from cutting the railroad lines and taking the city. To break the impasse, Union forces secretly dug tunnels under part of the Confederate lines and packed them with 8,000 pounds (four tons) of gunpowder. On July 30, the Federals lit the fuse. The explosion killed about 300 Confederate soldiers and created a crater roughly 170 feet long, 70 feet wide, and 30 feet deep. Union forces then attacked with a mortar and heavy artillery barrage, followed by an advance of 15,000 men—an entire army corps.

The 16th and other regiments of Mahone’s brigade were entrenched about three miles south of the Crater when they were ordered to counter attack. They formed a battle line 200 yards wide and twenty feet deep, fixed bayonets, and charged. The fighting was hand-to-hand and brutal. There is a scene in the movie “Cold Mountain” that graphically depicts the battle.

David Barnes not only survived the battle, but captured a Union Stars and Stripes during the fighting. For that achievement, he was added to the Confederate Roll of Honor.

The Army of Northern Virginia remained entrenched around Petersburg for the rest of 1864 and into the early months of 1865. On March 3, 1865, the 16th returned to the Petersburg defenses with the rest of Mahone’s division after confronting Union forces on the Boydton Plank Road. According to his military records, David deserted that same day. Perhaps he saw the handwriting on the wall. Only a month later, Lee evacuated Petersburg and began the last march of the Army of Northern Virginia to Appomattox. On March 18, two weeks after he deserted, David took the oath of allegiance and was transported to Norfolk.

David was about twenty-seven years old when he married my great-great grandmother Sarah Virginia “Jennie” Widgeon on February 28, 1870. He and Jennie lived on London Bridge Road. My mother believes the house was near the curve where the Lillian Vernon warehouse was located. London Bridge road at that time was straighter, probably continuing across Oceana Air Field from its back gate to the Lillian Vernon warehouse location.

David died on March 2, 1821 at the age of seventy-seven. His wife Jennie passed away in 1944 at the age of ninety-seven. My mother was twenty at the time and still remembers her quite well. David and Jennie were buried at London Bridge Baptist Church. When the Norfolk-Virginia Beach toll road (I-264 east) was built in the 1960s, the state took some of the cemetery property. Consequently, the Barnes family moved their graves to Forest Lawn Cemetery in Norfolk in 1966.

Copyright © 2012 Donald W. Moore. All rights reserved. May not be used without written permission.

This is likely a post-Civil War photo of my first cousin three times removed, 2nd LT James M. Malbone. He was wounded on May 3, 1863, during the battle of Chancellorsville while serving with Company B of the 6th Virginia Infantry, and suffered a partial fracture of the humerus of the right arm. His military records do not indicate whether the arm was amputated as a result of this wound. The photo is reversed, so that what appears to be the left arm is actually the right. Notice that the sleeve seems to be empty. 2LT Malbone is wearing an officer’s uniform and holds his hat, which is barely visible, in his lap. The boy is unknown. 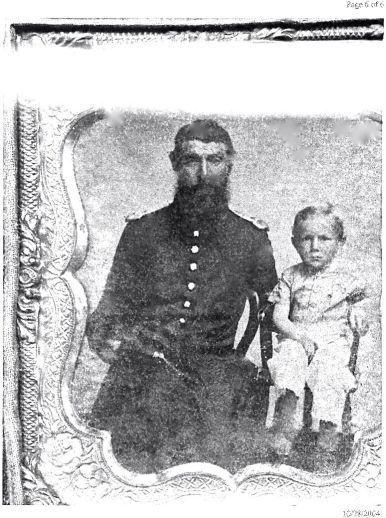 Copyright © 2012 Donald W. Moore. All rights reserved. May not be used without written permission.

The south Hampton Roads counties of Nansemond, Norfolk, and Princess Anne contributed several locally recruited cavalry and infantry companies that served with distinction in the Civil War. These are listed below under the regiments in which they served. Click on the links to see a graphic organization chart in which south Hampton Roads units are depicted in blue.

There are four Confederate veterans buried in the Moore family cemetery near Pungo in Virginia Beach, Virginia.

William H. Moore was born about 1835/7 the son of my great-great grandfather Andrew Moore and his first wife Margaret Malbone. William was a farmer before the Civil War. He was about twenty-six years old in 1862 when he enlisted as a private in Company C, 14th (Burroughs) Battalion, Virginia Cavalry. The 14th battalion was assigned to Daniel’s Brigade from June to July, and Ransom’s Brigade from July through September of 1862. During that time, the battalion saw action at the battles of the Seven Days from June 25 through July 1, and Malvern Hill on June 30. The 14th Battalion was subsequently incorporated into the 15th Virginia Cavalry on September 11, 1862. William H. Moore was present with the regiment from March through August of 1863. During that time, the regiment was assigned to W.H.F. Lee’s Cavalry Brigade and saw action at the battles of Chancellorsville  on May 1–5, Middleburg on June 19, and Gettysburg on July 1–3. That is the extent of his military records. After the war, William returned to his wife and children in Princess Anne County and continued farming. He died there in 1881.

James M. Malbone was born in 1828 the son of my great-great grandaunt Elizabeth Moore and her husband James Malbone. In 1850 he was a private tutor to a Princess Anne County family. He was about thirty-four years old in 1862 when he enlisted in Company B of the 6th Virginia Infantry. Shortly thereafter, he was elected 2nd Lieutenant from the ranks and probably served with the regiment during the battles of the Seven Days and Malvern Hill from June 25 to July 1, 1862. From September through November of 1862, he was a patient in General Hospital No. 7 at Richmond, Virginia, with jaundice. After returning to duty, he was with the regiment from November through December of 1862 in camp near Fredericksburg and probably participated in the battle of Fredericksburg on December 13, 1862. 2nd Lt. James M. Malbone was wounded on May 3, 1863, during the battle of Chancellorsville, and suffered a partial fracture of the humerus of the right arm, probably from a minnie ball. From May of 1863 through February of 1864, he was absent sick in Richmond, spending part of that time in General Hospital No. 4. In April of 1864, he was ordered to light duty on detached service. He spent much of the remainder of the war, from April through October of 1864, at Gordonsville with a brief stay at the Wilcox farm in August. In February of 1865, he was still on detached duty at the Van Pelt farm near Petersburg. There is no indication in his military records whether the arm was amputated as a result of his wound. But given the length of time he spent in convalesence and light duty, there is no doubt it was more than just a broken arm. James M. Malbone returned to Princess Anne County after the war where he served as a Commissioner of Chancery and school teacher. He was a charter member of the original Princess Anne Camp #96, United Confederate Veterans. James M. Malbone never married and never had any children. He died in 1912.

James Moore was born in 1813, the son of my great-great-great grandfather William Moore and his wife Elizabeth Gornto. James was a farmer. He and his wife Catherine raised a family of five children before she died in 1857. He was about forty-seven years old when the war broke out three years later. Several of his relatives posted bond as guardians of his five children, probably so that he could enlist in 1862 as a private in Company F, 16th Virginia Infantry. He was present for duty from April until September of that year and probably served with the regiment at the battles of Seven Days from June 25 to July 1; Malvern Hill on July 1; and 2nd Bull Run from August 28–30. He deserted, however, near Manassas on September 10 just before the battle of South Mountain. James was back with the regiment and present for duty from April through August 1864 and probably saw action during the Wilderness campaign on May 5–6; Spottsylvania Court House on May 8–21; North Anna on May 22-26; Cold Harbor on June 1–3; the Petersburg Seige in June; and the Crater in July. He was admitted to Chimborazo Hospital No. 1 in August with dyspepsia, and returned to duty a few weeks later. James returned to Princess Anne County and his children after the war, but died soon afterwards in December of 1870.

Enoch Petree was a Moore son-in-law. He was born in 1829 and married my great-great grandaunt Eliza (Moore) Jackson as her second husband. Enoch was a farmer before the war. He enlisted at about the age of thirty-three at the same time as William H. Moore and served with him in the same regiment. In 1863, Enoch was admitted to General Hospital No. 9 and transferred the next day to Chimborazo Hospital No. 1, where he was admited on 28 November with cataarh. He returned to duty on 6 January 1863. There are no further records until April 19, 1864, when Enoch was admitted to General Hospital No. 9 and then transferred on April 20 to Chimborazo Hospital No. 1. He was present there from April through August 1864. There his military records end. After the war, Enoch returned to his wife and family in Princess Anne County, where he continued farming. He died in 1899.

There are three other Confederate veterans who are connected to the Moore family but not buried in the Moore cemetery.

Napoleon B. Moore was born in 1833, the son of my great-great-grandfather Andrew Moore and his first wife Margaret Malbone. He served as 2nd Lt. in Burroughs Battalion of Partisan Rangers. After the war, he ran a general store, served in various elected county offices, was postmaster at Pleasant Ridge, and a customs inspector in Norfolk. He died in Norfolk in 1895 and is buried at Pleasant Ridge on Princess Anne Road.

Theodorick L. Moore was born in 1844, another son of my great-great grandfather Andrew Moore and his second wife Anne Flanagan. He served as a private in Burroughs Battalion of Partisan Rangers, probably because he was only 16 and underage when the war broke out. Later, he served with Company G, 5th Virginia Cavalry, in Paynes brigade of Fitz Lee’s Cavalry division. He was captured in 1864 near Harrisonburg and spent time as a POW in Fort McHenry and Point Lookout before being paroled to Princess Anne County after Lee’s surrender. He lived in Norfolk after the war, where he married, raised a family, and joined the Pickett-Buchanan Camp, United Confederate Veterans. He died in 1924 and is buried in Cedar Grove Cemetery in Norfolk.

Another Moore son-in-law, Emperor M. James was the husband of my half great grandaunt Minerva Anne Moore. He served in the same regiment with William H. Moore and Enoch Petree. He died in 1888 and is buried at Nimmo Church.